June 3rd, on the very last leg of my return trip from Flagstaff to Philadelphia, I listened to a Trail Runner Nation podcast that was basically an awesome lovefest between Ann Trason and Sally McRae. Ann said something to the effect that while she was never the fastest runner on the trail, her success came from her ability to troubleshoot, to problem solve. I took those words to heart during my race at Laurel Highlands last weekend, and though they didn’t propel me to the sub-20 that would qualify me to enter the Western States lottery, they did help me finish safely within the race’s own 22-hour limit, exhausted but uninjured besides my trademark bloody knee. I’m interpreting Ann’s words widely as well, using them to guide my post-race assessment and plans for future training.

This race report is not going to be a mile-by-mile / hour-by-hour / aid station-by-aid station breakdown. That’s not really my style, and there are other reports out there that give a pretty thorough overview of the race in that respect.

In my previous post I mentioned that my “A-goal” was an 18-hour finish, with the States-qualifying 20 hours my “B-goal”. I realized pretty quickly during the race that the “A-goal” was almost certainly not going to happen. I also spent a lot of time reassessing the labels I had given these goals and about how the phrase “A-goal” was really more appropriate to the achievement of a sub 20 finish. I mean, I just cared about it so much more. I had thought, well, I’ll aim high with a time that sounds achievable on an optimal day and then if things go wrong what I have to fall back on will still leave me ecstatic. But I think it would have been a better idea to place the goal that truly compelled me forefront in my mind, and forefront in my planning. Of course, it’s hard to set goals and make plans for a race on terrain you’ve never run and that’s 20 miles farther than you’ve ever run. And while I don’t go into races stupid, I don’t study race reports and elevation charts for hours and hours either (though I do sometimes leave them pulled up in neglected browser tabs for weeks at a time, sparing them barely a glance!). 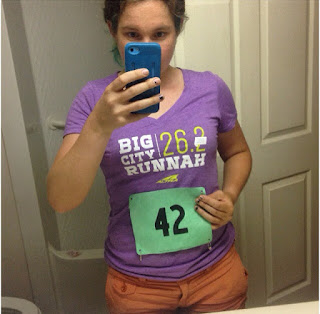 My race bib answers the Ultimate Question of Life, the Universe, and Everything. 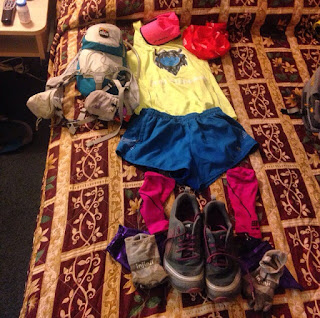 Flat Clare (taken before I picked up my race bib)

I think my morning nutrition plan was pretty spot-on, if a tad ridiculous: banana and Clif bar at ass-o’-clock in the morning at the EconoLodge of Johnstown (possibly the worst hotel I’ve ever stayed at, mainly because to say the toilet barely worked would be generous indeed), some blackberry MamaChia on the bus to the start, and TastyCake Butterscotch Krimpets and hot coffee shortly before the race. I walked the three early nasty hills, and got passed by what felt like absolutely everyone on the big one. I wasn’t worried about time at that point, but I did feel kind of ashamed. Climbing isn’t a strong point for me. That had been reinforced at The North Face 50M at Bear Mountain, but I didn’t make significant changes in my training plan to reflect that, even knowing what I was in for the first 10 miles or so of this race. The most convenient place for me to practice climbing is the stairs and bleachers at Franklin Field. Unfortunately, right about the time I felt recovered from Bear Mountain, Penn held graduation ceremonies there, then closed the facilities for summer for repairs and the installation of a new track. There are other options for hill and even stair training, of course, but that was by far the most convenient and effective, and I didn’t really do much to compensate for that change in plans.

I came into the first official checkpoint just over 30 minutes before cutoff. I gained time at all subsequent checkpoints, but because the first two (of four) checkpoints were the most stringent, making time up against the race’s cutoff clock still meant barely clinging to 20 hour pace (I didn’t make a pace chart for that, but it was pretty easy to keep track because I needed just a little faster than 3.5 MPH). I drank a shitton of water, Gatorade, and soda, filling my pack at every aid station. It wasn’t as hot as I’d expected, thanks to clouds and tree cover, but it was exceedingly humid, so I wasn’t peeing, even with good fluid intake. Most food just didn’t sound good though. I usually want things like PBJ sandwiches and fig newtons, but that day I really only wanted fruit and salty potatoes (and potato chips). I definitely wasn’t eating enough. At the very last aid station I had one whole strawberry! 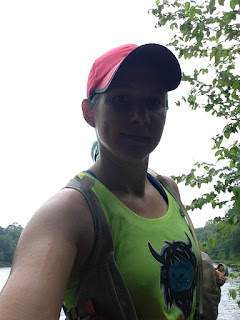 Troubles came starting probably around mile 30. My quads were pretty dead (which doesn’t usually happen to me – it didn’t happen at Bear Mountain, for instance), so downhill’s were hard, and when I did hit easy grades, I kept getting nasty side cramps. Finally, a little before mile 35 I remembered I had both “vitamin I” (Ibuprofen) and the extra salty margarita shot bloks in my pack. That turned my race around entirely for about the next 20 miles. My quads felt GREAT. My teeth felt disgusting, but my cramp disappeared, and when it tried to reemerge later, more salty shot blocks quelled it again. As evening approached, I knew it wasn’t going to get any hotter. I had also heard tell from multiple sources that around mile 50 the terrain got much easier, and if you had anything left in your legs at that point, you could make up some time. I was still barely clinging to 20 hour pace. I felt great. I was ridiculously optimistic. I was an idiot. 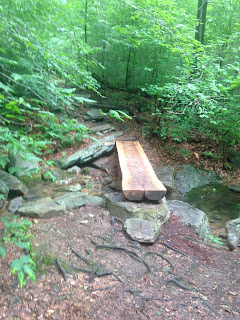 I dubbed this "buttlog", though "crotch log" is probably more accurate :P

Running at night is hard. I have very little experience with it (apart from in the city, which is obviously not the same thing – you know, pavement, street lights, tipsy confidence). One fairly short full moon towpath run with RVRR back before I’d ever done a real trail run, I think. A little over one 20 mile loop pacing at Rocky Raccoon, mostly hiking. Nothing where I myself was racing. To add to the difficulties, for something like two full hours starting probably around 7pm (honestly I have no idea for sure), it thunderstormed like woah. This was a little unsettling, as I was mostly alone on the trail at that point, but also kind of refreshing and I was willing to embrace the drama of it. Plus, it kept the evening bugs away! I was a little less willing to embrace what it left behind when full night fell: mud. Mud and fog. Fog that made it hard to see where the mud was especially slippery and would slide you straight into a rock if you tried to do anything resembling running. Fog that made it hard to look for blazes (I’ll admit, I was probably a bit paranoid in constantly checking for them but damn did I not want to get lost at that point in the race!) while stepping carefully, even using both a headlamp and a small handheld flashlight. And with the dark came some darker thoughts as well, definitely worse than anything I’ve experienced before during a race. The time over which 20 hours definitively slipped away was the worst, as it was so hard to tell whether or not I was giving up prematurely. I remember very clearly thinking, even if I could speed up and turn things around, I don’t deserve it. I could have made up some time trusting the trail and not continuously verifying the presence of blazes, but it wouldn’t have been enough time. My legs might have been able to take speeding up as much as was required, but I absolutely would have fallen and hurt myself. I just didn’t have nearly good enough vision or coordination at that point – I was jumping at fireflies and weird shadows, too – and the trail conditions were genuinely treacherous. And I DID fall and bloody up my knee a bit with three miles to go. 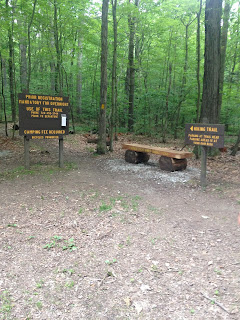 Finish area (taken the evening before the race)

The final 5 miles were just LONG. Over 20 minutes each, even with mostly downhill. At that point I knew I would miss 20 hours but also knew that only a nasty fall would keep me from coming in under 22, so I just tried to keep going steady, hurrying only because I wanted to be DONE.

At the end there was a trophy, a patch, friends, wet wipes, and vegetarian chili. Official finish time was 20:37:12. 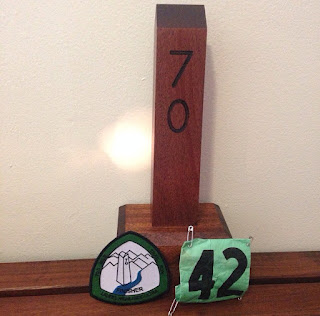 Yesterday I ran a little over a mile total with Back on my Feet. My calves are very easily fatigued – quads too, but less so. My feet, however, are magically pristine. Only new black toenails were temporary, from mud. I wore Altra Superior 2.0s, injinji toe socks, and a liberal gooping of Trail Toes (a sample Maggie gave me after the Phunt 50k way back in January). My big toes busted through my socks, but my biggest problems were merely prune feet and just a bit of rubbing – not even a real blister. Shoes didn’t grip the slick rocks quite as well as I wanted, but they kept my feet happy and got me through the race.

On the drive home, I shed a fat, solitary tear for my failed Western States goals… and then promptly busted out in maniacal laughter, and that was that. The thing is, I know it’s something like a 5-year timeline once you start entering the lottery. I don’t WANT to get in next year, and I’m not even sure about the year after. Mentally, adding a year to a 5-year timeline doesn’t really change a whole lot about my outlook. I still want it just as much. It’s still very far away.

I did think about trying for another qualifying race – I’d had my eye on Rio Del Lago at one point anyway – but I’m 99% sure now that I’m going to wait and run my first hundred at Rocky Raccoon in February. From my experience earlier this year pacing the hundred and racing the fifty, I know that it’s a race I can get excited about and I feel like it’s one that plays to my strengths, such as they are, and that I can train for effectively and potentially do well at. Who wants to come with me to Texas?
Posted by Unknown at 8:55 AM